A blog originally for keeping track of my hobby of being a Beekeeper which has evolved to include Home Brewing and even more recently to follow me and my families approach to "The Good Life". Eventually I hope to include baking recipes and stories of our flock of chickens also reporting on the success and failure at the allotments.

Hi all. Thought I would give a long overdue update on this blog. It has been over 3 years since I last posted anything and can't see me coming back to regular writing in the near future, although I would like to eventually. I have had a lot going on with work and my home life and the largest of these is the arrival of my newest addition to the family, my son! He arrived in March 2 years ago but the build up to his arrival was a stressful time with my wife developing sciatica! Thankfully both he and my wife where both fine and so we now have a boy and a girl so I think that is the family complete.

My Bees are still buzzing away although I now only have the top bar hive with Bees in at the moment. This is due to having to move site again and therefore haven't had a chance to increase my numbers. The lady who's land it is though is very keen on me increasing my numbers; I think she wants more honey! Who can blame her.

I have almost stopped with home brewing but this is more due to my son. He won't let me (or anyone) do anything without getting involved. A minor inconvenience would be a huge understatement when it comes to doing anything with him about. With Lauren I could get almost anything done and she would be fine staying out of my way. We didn't know how easy we had it  until he came along! We do love him dearly but sometimes he is just far to independent for a 2 year old. It's times when he goes and gets the eggs from the cupboard and then gets a pan out, takes it to the sink and then fills it with water, takes it to the cooker and tries to turn it on!! We watch him for a while but he gets soooooo angry when we stop him!

Anyway I think that will cove it for an update for now. I will aim to write more posts but can't promise. I have a better camera on my phone so there is potential for some good photos and videos when I do return on a more regular basis.

Although I quite often write about my army of ladies, the Bees, every now and again I like to show off my 2 ladies. This photo was taken at a recent WPBKA apiary meeting and was the first time Lauren went to the Bees. She was brilliant for the time she was there but got a Bee in her suit so Steph dealt with that and then took her back to the house. 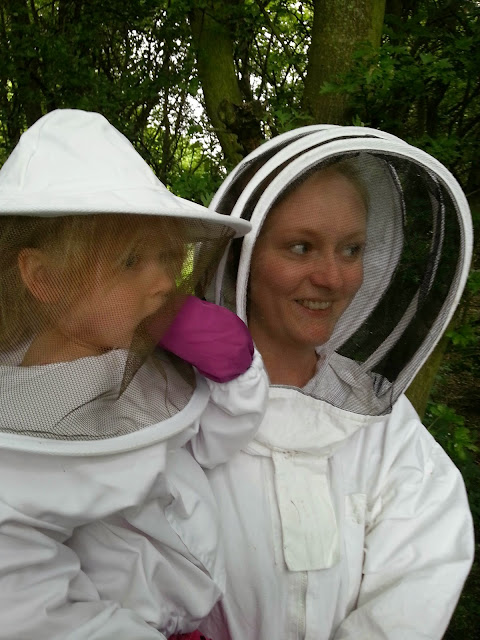 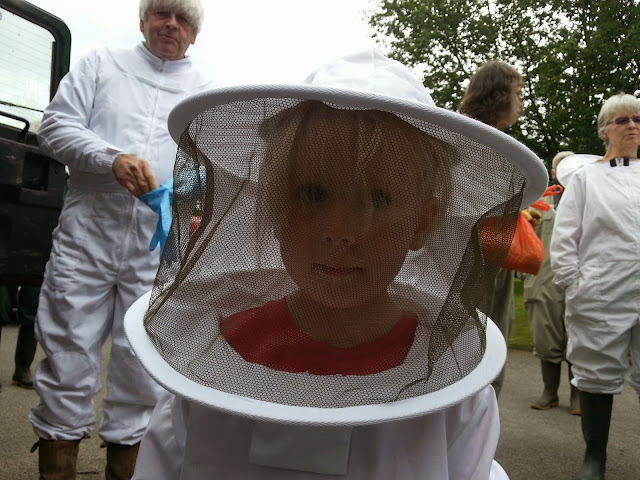 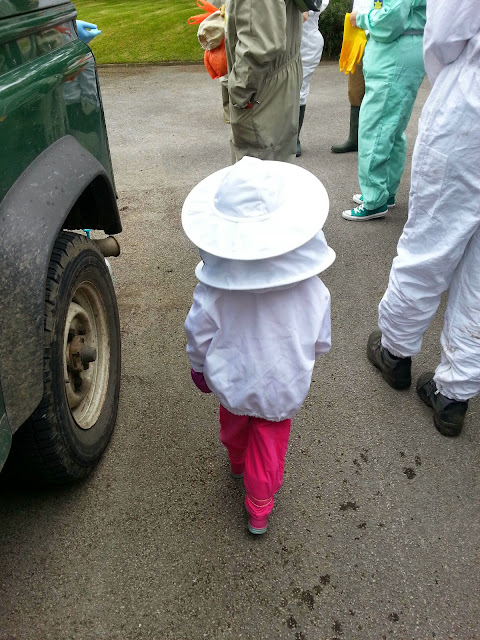 Malta is a tiny country in the Mediterranean closest to Sicily. It takes barely an hour to travel from one end of the island to the other (it takes even longer if you keep going the wrong way and having to backtrack). The name Malta is thought to derive from the Greek word μέλι or meli, which means honey and the ancient Greeks called the island Μελίτη, pronounced Melite (info taken from good old Wikipedia). This is believed to be due to Malta having its own endemic species of honey bee and being well known for its honey production.

Me, Steph, Lauren and Steph's Aunt have just come back from a 10 day holiday in Malta and in that time got to see a large amount of the tiny Mediterranean island and it's even smaller island, Gozo. Whilst we were there we had various sites we wanted to visit, including some that were used to film the first series of Game of Thrones! One site I really wanted to see was in a town called Xemxija, near the north of the island. In this town there is an area which has  several ancient sites including burial grounds, a Bronze Age village site, Neolithic remains and a Roman apiary site! Not surprising the area I was most interested in was the ancient apiary site. At the end if this post there will be some photos showing the area.

On Sundays there is a major fish market held in a town called Marsaxlokk, to the southeast of the island near to where we were staying. The town is fairly peaceful and quiet during the week but on a Sunday it seems like half the island descends upon this area for the fresh fish that is sold there. By the time we got there the market was well up and running and there were a large variety of fish and shellfish that I recognized and even more that I couldn't. Steph and Lauren weren't too impressed with the smell of the fish although in my opinion it wasn't too bad. Although it is best known as a fish market there was also plenty of fresh fruit and vegetables plus toys, clothes and general tourist tat. There was also a stall selling local honey. I bought a sample of 3 varieties of honey from the lady and also talked to her for a short while. Her husband is the Beekeeper and he has over 100 hives spread over Malta and Gozo. I'm a long way off having the time, patience, equipment and sanity to have that many Bees but maybe when I retire it could be an option. Below are lots of pictures of the Bee related parts of the holiday. 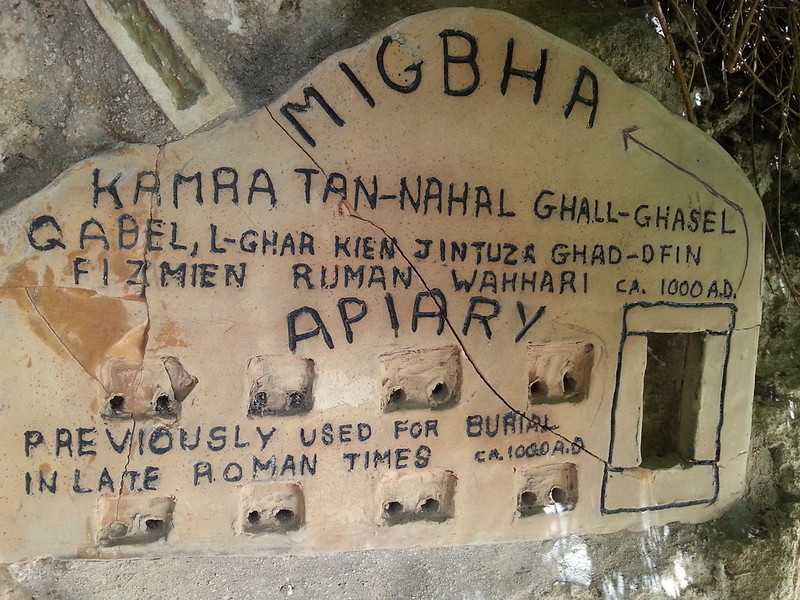 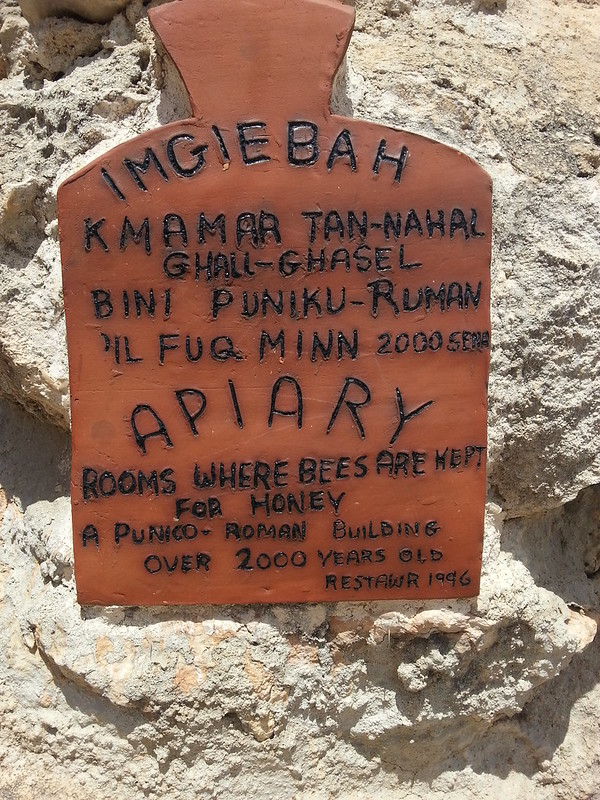 Below is a small selection of the photos I took of Bees on flowers. 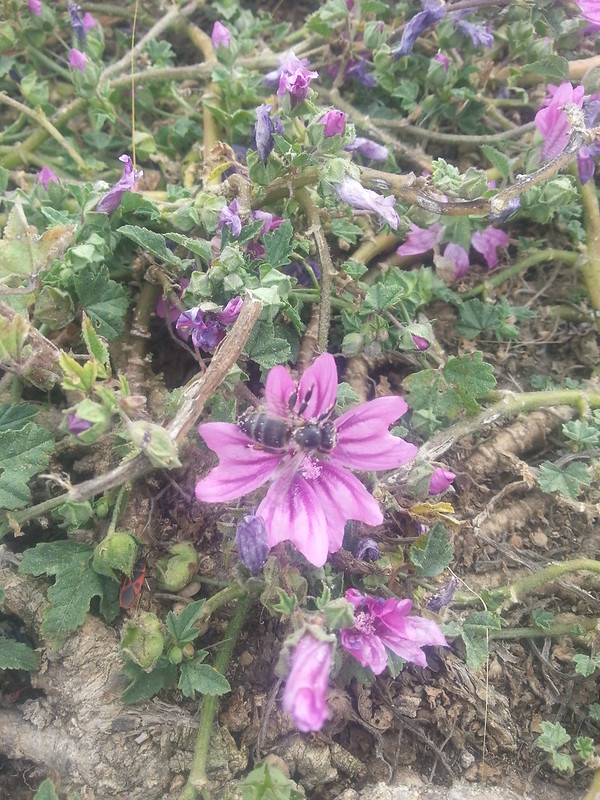 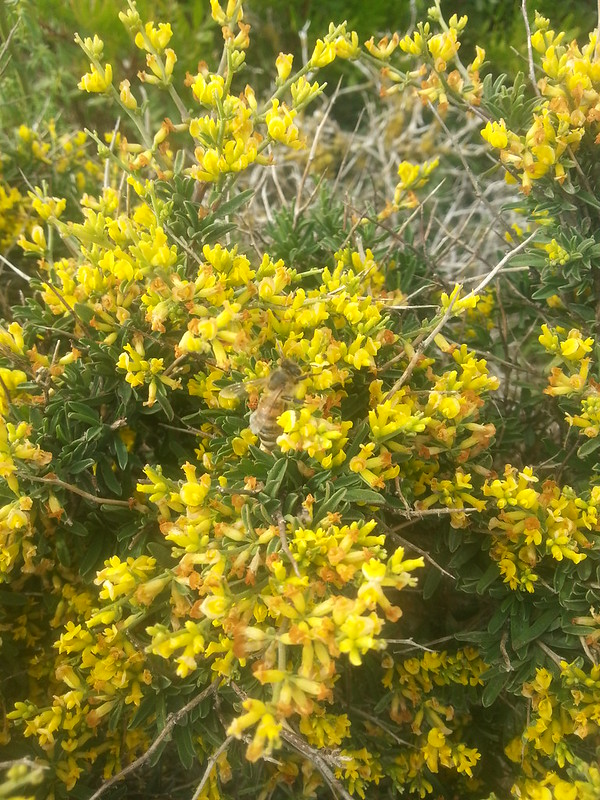 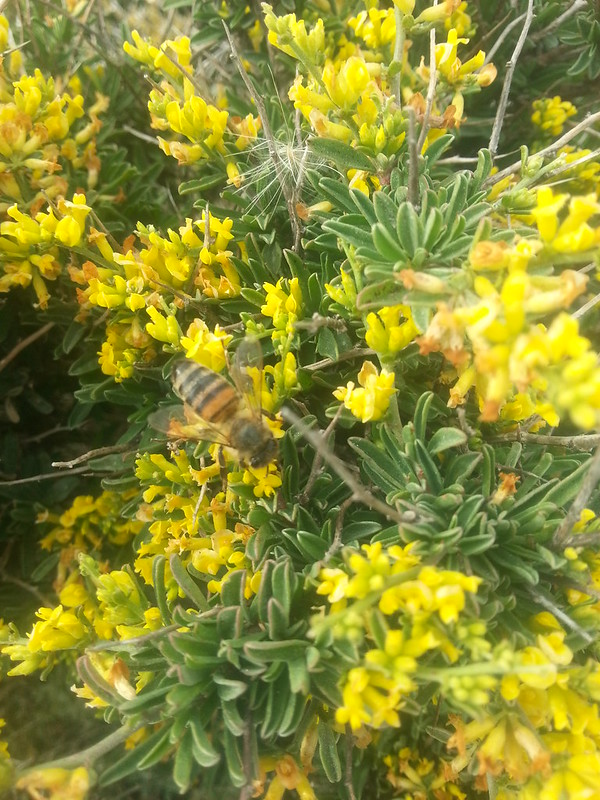 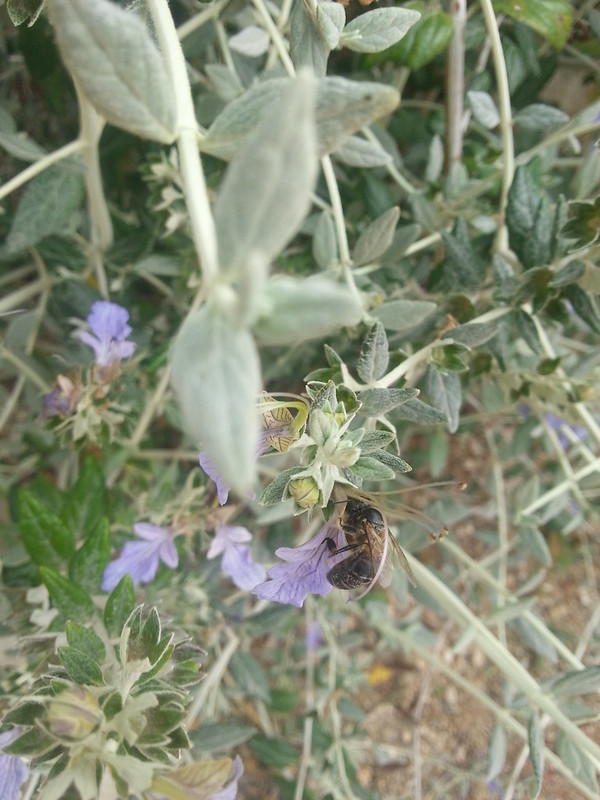 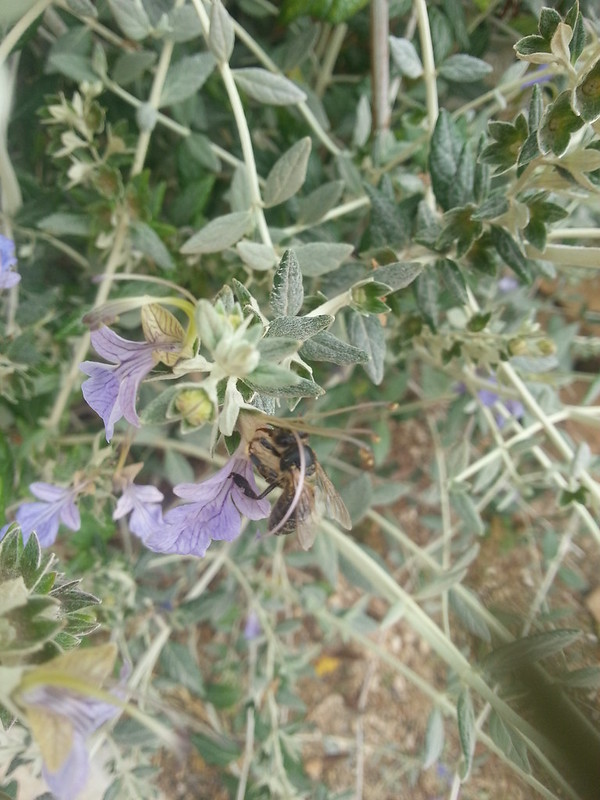 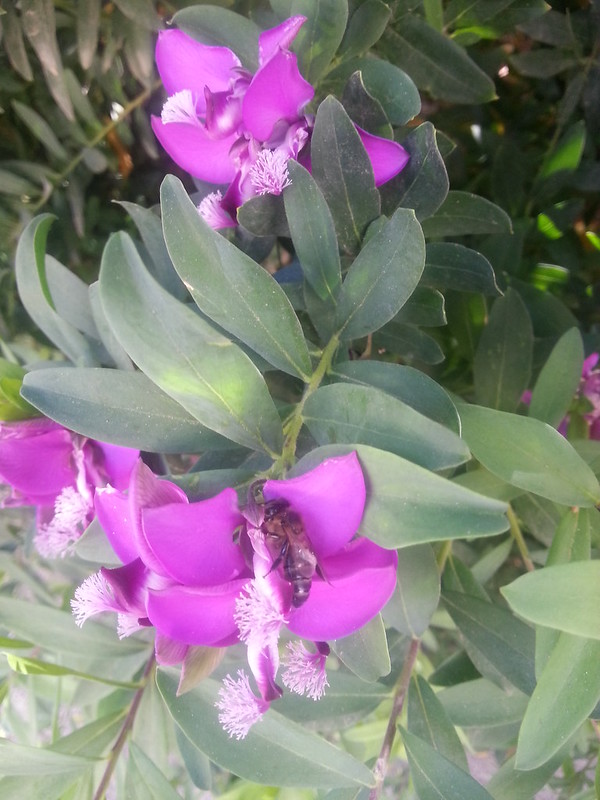 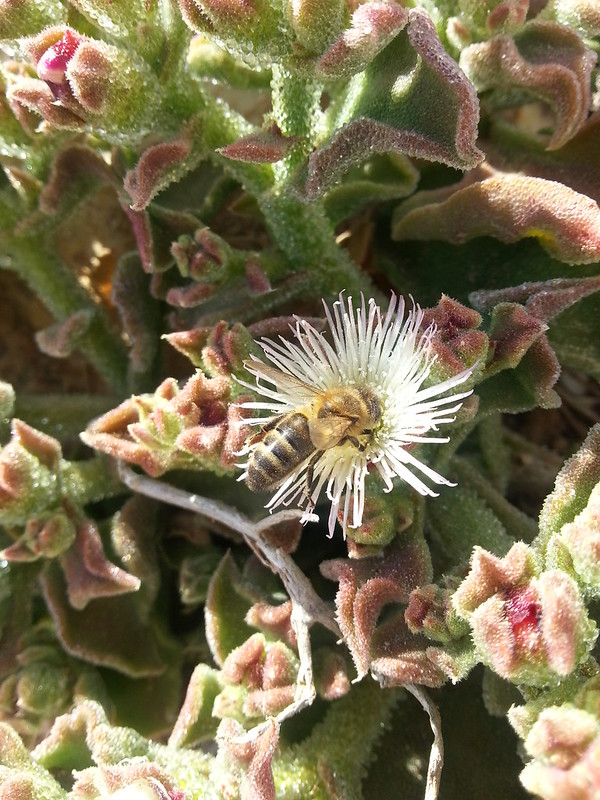 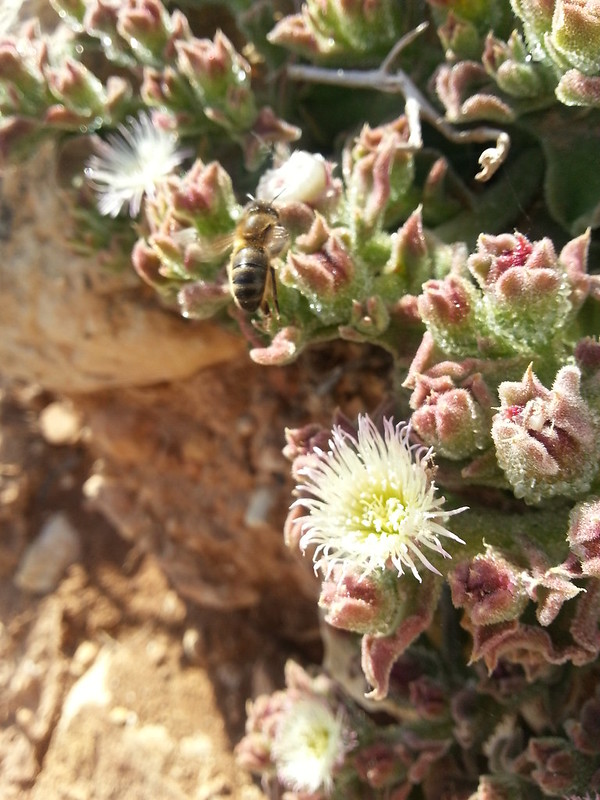 Continued on from my last post, which had no photos, here is the process with photos! 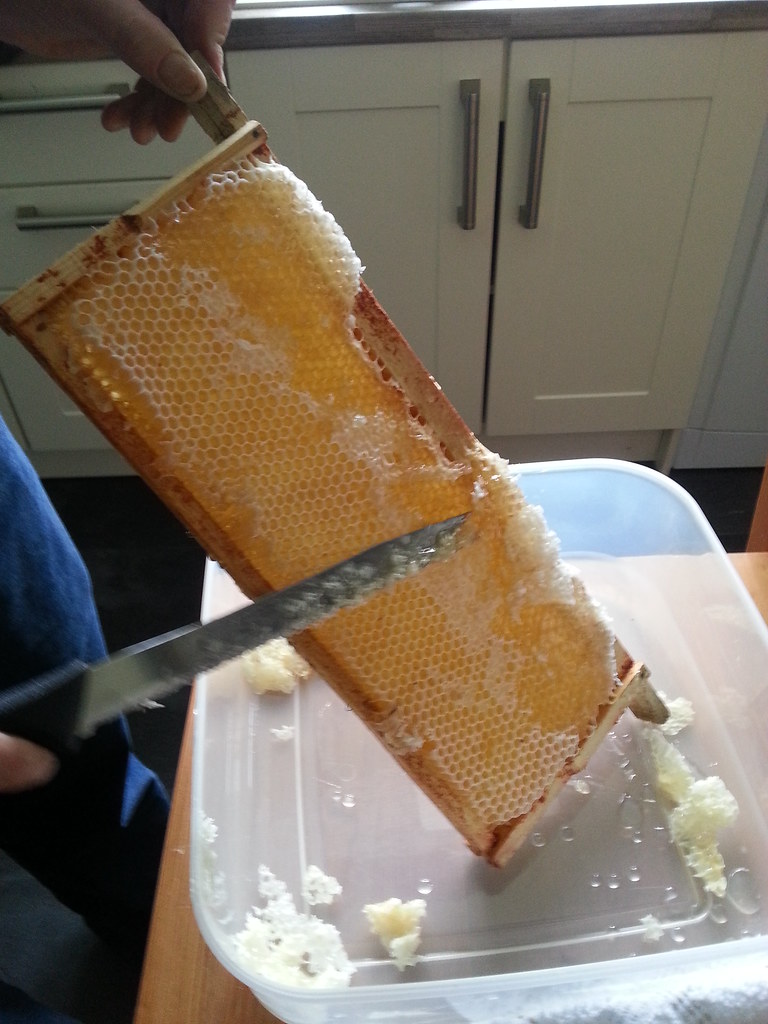 I have recently come back from a family holiday in Malta (which will be the subject of another post) and all the time I have been away I have had in the back of my mind the honey in the combs. At this time of year there is oil seed rape (OSR) in the surrounding fields to my apiary and OSR honey is well known for it's properties of setting solid in the cells. Before I went on holiday I did conduct an inspection and at that point there were several frames of honey ready for extraction however I didn't have enough time to get hold of an extractor before my holiday.

The first chance I got to go to see the Bees I was especially lucky to have my wife with me to help as once I'd opened the first hive it was clear that we were going to be taking lots of honey from the hives. The first colony I checked had the most and I still didn't take it all. I think I took approximately 12 frames from the first hive. When I moved onto the second hive it was clear there wasn't as much honey to take but there was still about another 8 frames! Between me and Steph we got the job done quite fast; Steph operating the smoker and passing me equipment while I shook the Bees off the frames and took them to the side to be taken away later. I also did a quick inspection while in the hives and couldn't find any queen cells, although there was a huge amount of Bees therefore they could be near to swarming.

After we had finished in the hives we headed off home with 2 supers mostly full of honey. I was unable to lift them together and lifting them 1 at a time was a struggle. The next problem was extracting it. The same day I had a WPBKA committee meeting and there I discussed with another member the use of her extractor however while in the meeting I got a notification on my phone telling me I'd been the highest bidder in an auction for an extractor! The extractor arrived 2 days later and I cracked on with extracting the honey. I will put the extraction process in another post.
Posted by Morlock5K at 19:09 No comments: